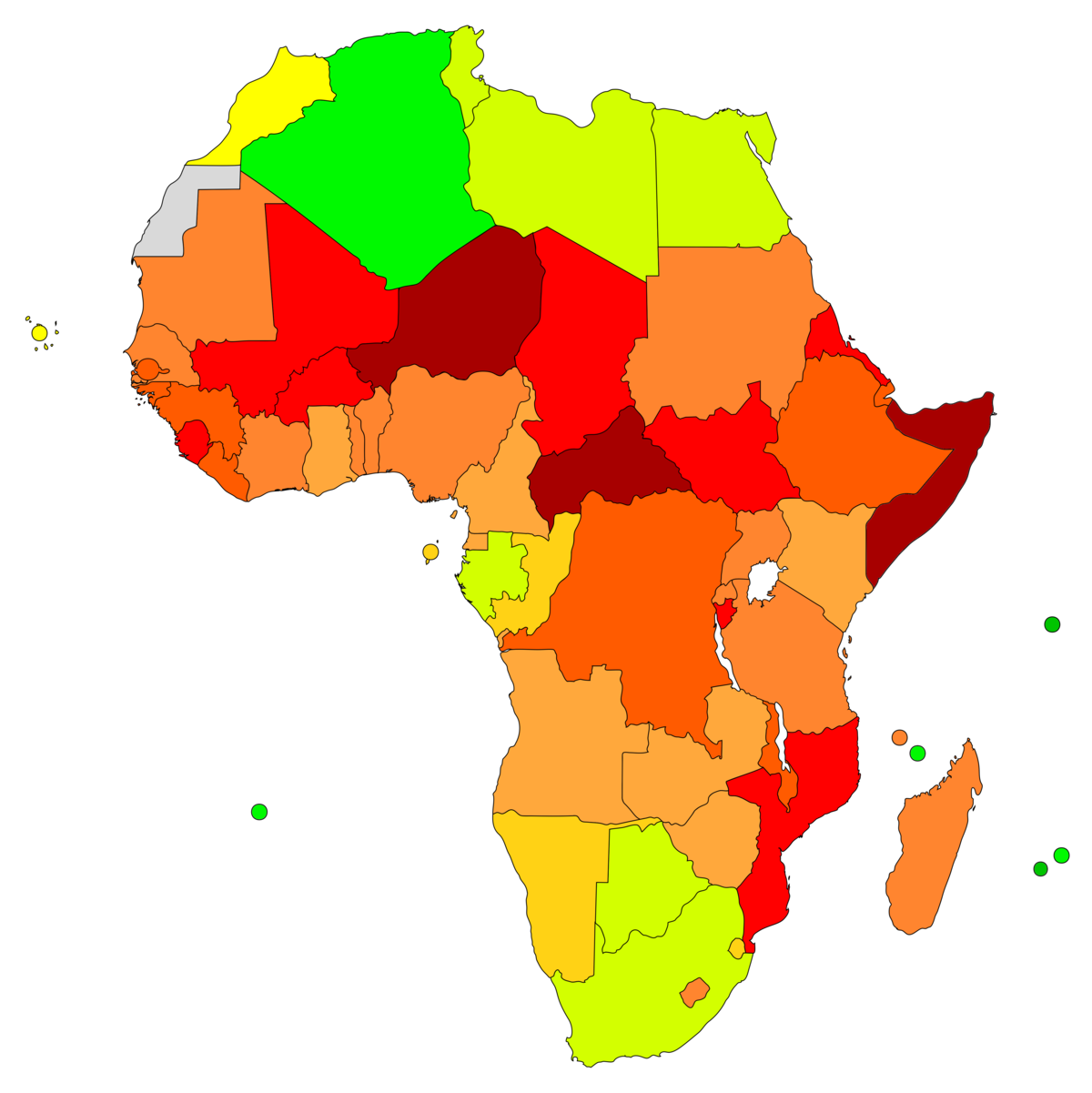 Whenever we think or say Africa the image of a starved child pasted on a billboard comes to mind or of families living in wooden cabins without rooftops over their heads. This isn’t an accurate picture of Africa but in any case, the reality remains that Africa actually remains widely underdeveloped with its resources being squandered. when economics try to come up with explanations behind underdevelopment of Africa, the main culprit is always told to be slavery. Obviously, the obvious question arises? What if Africa was never colonized? Would Africa be so underdeveloped? The questions are good, but no one actually possesses the answer to these questions. But all that financial experts have been able to come with are numbers and figures.

Europe colonized Africa under the guise of friendship and. Yet, all that Europe did was strip Africa of its pride by enslaving Africans and stripping them of their resources and ability of development.
The countries in Africa lost all their individual power – leading to loss of their culture, identity, interests, and ideas. Africa lost its independence overnight, and the consequences of that are just as large as it seems.
Now, as countries in Africa have gained their independence throughout the years, it is time for them to grow on their own.

While the rest of the world’s economy grew at an annual rate of close to 2 percent from 1960 to 2002, growth performance in Africa has been dismal. From 1974 through the mid-1990s, growth was negative, reaching negative 1.5 percent in 1990-4. As a consequence, hundreds of millions of African citizens have become poor: one half of the African continent lives below the poverty line. In sub-Saharan Africa, per capita GDP is now less than it was in 1974, having declined over 11 percent. By 2000, the number of poor citizens in the world who lived in Africa rose to almost two in ten from one in ten in the 70’s. That trend translates into 360 million poor Africans in 2000, compared to 140 million in 1975.

Over the past 40 years the investment rate in Africa has fallen. Since 1975, the investment rate has declined to 8.5 percent for the whole continent, compared to investment rates for the average-performing OECD economy of between 20 and 25 percent. Furthermore, most of the investment was skewed in the direction of the public sector.
The economic situation in Africa would also improve if the military conflicts that have plagued the continent over the past half-century stopped. The development of law and property institutions; more investment in the education sector; the reduction of policy distortions that make investments excessively expensive; and the reduction of wasteful consumption expenditures could also contribute to the economic growth.

One of the consequences of Africa’s economic stagnation is that income inequality has increased, while it has decreased worldwide. This income inequality exists whether one looks at between-country or in-country measures. A prime example is Nigeria where the incomes of the poorest 80 percent of the citizenry have declined, while the incomes of the richest have increased. That situation provides little incentive for the rich and powerful to make meaningful policy changes. A walk around capital cities will put a stamp on the discourse that Africa is rising at a significant rate. The crane-filled skylines, construction of road networks and railway lines, multi-million-dollar mansions and business malls erupting across major towns and cities, and growing technologies are just but a few indications of the continent’s ascent to prosperity. But even as people across the globe engage in discussions about how fast the continent is growing, ironically, the other discourse that goes hand in hand with this narrative is the astounding number of people who are still grappling with deep-rooted poverty in the continent.

One can only wonder why there is still a widening gap between the rich and the poor and why Africa is still struggling with poverty despite the fact that it is home to a major percentage of raw materials that are in hot demand around the globe.

For Africa to grow sustainably, it will need to pursue comprehensive methodologies that address all the bottlenecks to development. For this, the governments will have to first understand the reasons why Africa has been held back for so long.
Here, we have assorted the issues that Africa needs to address to be at par with the rest of the world in terms of prosperity.

The argument that civil wars, like terrorism, contribute to poverty is a no-brainer. Wars disorient people and leave them destitute. Roads and communication networks are destroyed or barred which further cripples these businesses. Industries collapse, people lose jobs and investors lose confidence in the affected country.
Then, of course, there is the trail of deaths and scores of people left injured; and the loss of property which adds to the increase in poverty levels in areas marred by wars and terrorism.

Nigeria, which became Africa’s largest economy in 2014 is experiencing economic challenges with World Bank’s Global Economic Prospects 2016 predicting that the country’s economy will continue to slow down.
With such high economic impacts and deaths, poverty is inevitable.

Corruption has taken root in most African countries. This has contributed to the plight of Africa today. Senior leaders in government and private sectors alike have resorted to taking bribes.
The respondents said that corruption in the region was increasing despite the campaigns and activism by civil society and the population. The police were identified as the most corrupt group across the region.
The evening news includes at least one story which covers how a high-ranking official is under investigations over corruption allegations. The laws on corruption are lenient allowing those caught in the act an easy way out.

Africa is increasingly aware of the corruption problem and even the importance of managing it within the region. The will to battle corruption is strong but the deeply imbedded corruption network present in politics and laws makes it difficult to deal with corrupt cases especially those involving senior political leaders.

In some instances, acts of corruption have been used to fuel civil wars and terrorism.

3) Education and the knowledge gap

Even up to today, some African households cannot afford basic education for their children. Although some governments in the region have taken up the matter of basic education provision as a government project, many areas lack schools and even where schools are, they are sparsely located posing a challenge to the young children who would rather help at home than make the long walk to school. This furthers the economic decline in Africa and contributes to regions remaining undeveloped. For Africa to be competitive, there is a need to invest in reinventing its education and research systems.

When a continent is not able to create quality health infrastructure and system for its own people, it risks falling into a trap where the economy remains stagnated.
Poverty is both a cause and a consequence of poor health. Poor living conditions increases the chances of poor health. In turn, poor health entraps communities in undying poverty.
One of the consequences of diseases is that it depletes individuals, households and communities’ energy to work to build their lives and that of the society. With less individuals working to make their lives better, poverty creeps and entrenches its roots.
WHO reports that approximately 1.2 billion people in the world live in extreme poverty-surviving on less than one dollar per day.

Diseases (communicable ones) spread more rapidly in communities that are poor and do not have access to basic amenities. Take for example the spread of Malaria which can easily be managed through simple yet vital but scarce utilities like mosquito nets and repellents.
HIV/AIDS, cancer among other diseases have also contributed to increased poverty levels in Africa. These diseases, apart from ‘decapitating’ the victims, leave families and communities in debt which further worsens their ability to sustain themselves.

Although Africa boasts of indigenous and numerous resources, they are poorly distributed among countries and within states/regions in those countries. Despite that, governments have not adopted strategic ways to redistribute such wealth to the citizens.

Wealth distribution is an issue, but what is even more disturbing is how great and promising resources like oil and precious minerals are exploited by foreign investors and big corporations which pay little or no taxes to the countries in which they operate. Such practices have left Africa twirling in poverty.

In the recent past African leaders have been heard arguing that International Aid has curtailed Africa’s growth efforts. During the recent fourth World Government Summit in Dubai, President Paul Kagame of Rwanda said that donor support should not be relied on forever but instead be used to build institutions and the economy.
Another outlook into Africa’s failing economy is the loss that Africa is experiencing as the foreign aid-giving countries suck Africa dry of its resources. The outflow costs to Africa surpass the inflows that get to the continent in form of aid. Health Poverty Action highlights that Africans are losing almost six and a half times what their countries receive in aid each year.

Introducing fair trade policies for African countries to trade with nations abroad will grow Africa’s economy much faster than aid would. Unfair trade strategies have rubbished Africa’s growth exertions.
Poverties Organization argues that instead of the international communities protecting their benefits, they should give preferential market conditions to poor countries for export or agricultural development. This, ‘Poverties’ adds would provide them (African nations) a path to fast development, and hopefully diffuse the benefits to inner regions. This will have a direct effect in the internal market, help it to thrive and alleviate poverty in African countries that are landlocked.

The discourse on poverty in Africa is like a jig-saw puzzle: Africa as a region is rich but her people are poor.
Although Africa is rising, poverty is curtailing the continent’s growth efforts. Africa needs to address the negligence of sound economic policies. Corruption, selfish personal interests, thirst for power, religious and ethnic differences are clogging the pipeline within which development would have flowed.
Governments, regional communities and private sector should develop effective strategies based on regional needs and partner with like-minded corporations local or foreign to drive Africa’s Development wheel forward.

Africa has the potential to rise above any other continent if only it laid emphasis on shunning corruption, providing basic amenities including water, food, shelter, energy, education and security for all. If we look keenly at what is coming to Africa in terms of aid and what is going out of Africa in terms of profits, tax evasion and debt payments, Africa can be summed as wealthy. In fact, Africa is financing other continents.
Africa is a wealthy continent. Let us all strive to grow the region to live its name, ‘Africa a land of wealth!’. In an unprecedented move, the House select committee on the Jan. 6 attack on the Capitol has issued subpoenas for five House Republicans, including GOP leader Kevin McCarthy. All five had previously been asked to appear voluntarily and quickly refused. Now, their testimony is being compelled by month's end, a move most of them quickly slammed on Thursday. In addition to McCarthy, the panel also subpoenaed GOP Reps. Jim Jordan of Ohio, Scott Perry of […]